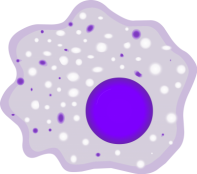 Researchers in the lab of Kathryn Miller-Jensen, associate professor of biomedical engineering and molecular, cellular & developmental biology, used single-cell RNA sequencing to get a closer read on how individual macrophages react to different stimuli. They found that, while these cells tend to be multitaskers, some are more inclined toward responding to certain cues than others. The results are published in Nature Communications.

The M1–M2 paradigm has helped scientists understand the innate immune response. Researchers, though, have long suspected that there’s more flexibility among macrophages in vivo than this two-category system suggests – that is, a cell can be both an attacker or healer depending on the circumstances. But what do individual macrophages do when confronted with M1 and M2 cues at the same time in a controlled environment, such as a tissue culture dish?

“No one had looked at that, and we decided to try it with single-cell sequencing,” Miller-Jensen said. By doing so, the Miller-Jensen lab was able to get a much more detailed picture of macrophages’ responses when stimulated with both inflammatory and resolving stimuli. They found a great deal of variability, including a subset of cells that seem to respond to only one cue or the other for certain key functions like secretion.

“The stimuli are the environmental cues, but we’re thinking that there might be some variability in the regulatory network inside the cells that allow some of them to respond more strongly to one cue versus another at any given time,” Miller-Jensen said.

It’s an important step toward a better understanding of the different types of macrophages.

“It could help us identify how macrophages exist in these different states in a tumor, or non-healing wounds, and other disease environments,” she said. “If we had a more sophisticated understanding of what subsets exist, we might better figure out how to target them or regulate them.”

The researchers note that the diverse responses to opposing cues may allow macrophages to more readily adapt to changing environments, as well as to quickly transition from attack mode to focusing on tissue repair.