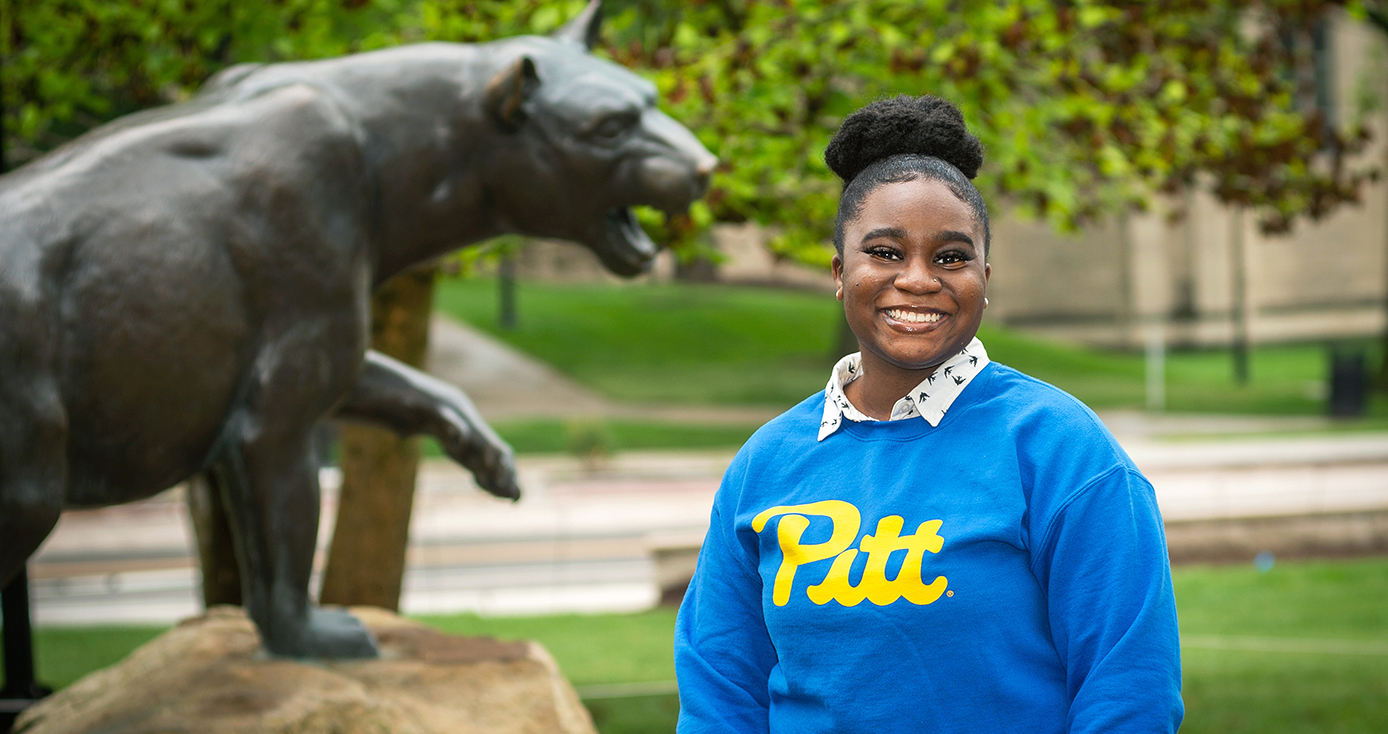 Destiny Harrison-Griffin’s first experience with Pitt’s close-knit community came after an eight-hour drive from Long Island for a campus visit.

“I felt welcomed from the time I stepped foot on campus,” she said, recalling how individuals, seeing that she had a Pitt information folder in hand, took time to greet her and offer their help and encouragement.

“People stopped me on the street to talk to me,” she said. “It was just very reassuring and calming—Pitt was one of the first colleges I visited, so I didn’t know what to expect.”

Looking back, “Pittsburgh was the perfect place for me to be,” the Pitt senior said, citing the small community feel in a city that nevertheless has plenty of networking and internship opportunities and resources.

As a first-generation college student, Harrison-Griffin navigated much of the transition to higher education without a clear idea of what to expect. “I didn’t have a lot of guidance. I followed my own intuition,” she said.

She has found her way. An aspiring attorney, she’s graduating as part of Pitt’s Class of 2021 with degrees in political science and Africana studies and certificates in global studies and Latin American studies and preparing for the Kenneth P. Dietrich School of Arts and Sciences May 4 commencement ceremony at PNC Park.

Hear more from Destiny Harrison-Griffin on Good Trouble and its work in this recent episode of the Greater Pittsburgh Community Food Bank’s Food Podcast.

She hasn’t yet chosen where she’ll continue her studies. Deciding among acceptance offers from about a half dozen law schools is among her top post-commencement priorities, she said.

While Harrison-Griffin looks ahead to continuing her education in order to help others, she’s leaving her own legacy of mentorship and advocacy here at Pitt, where she’s worked to make the campus community even more welcoming than she found it.

When she arrived as a first-year student, “I was very introverted,” Harrison-Griffin said. “I was scared and nervous. I was the only one from my high school who came to Pitt, and home was eight hours away.”

She quickly formed a bond with her roommate in Tower B, began attending events and soon found a community of students from around the country through the Dietrich School of Arts and Sciences’ BRIDGES program for underrepresented students.

Her early experiences motivated her to act. “I wanted to serve as a mentor, to help prospective students if they need someone to talk to,” she said.

Having attended predominantly white schools in New York, at Pitt she also found her first opportunity to delve into her own cultural background through Africana studies courses. In her sophomore year, she joined the Dietrich School’s undergraduate recruitment team as a student ambassador, and over the past three years, she’s had the opportunity to meet people from an array of backgrounds.

What she’d initially intended as a minor grew into a major as she fell in love with the course work and found a favorite professor in Christel Temple. “It was really enriching to be taught by a Black woman,” Harrison-Griffin said. “I didn’t know I’d needed it until I had it.”

Her role as a Dietrich School ambassador involved outreach to prospective students in general, but she was particularly inspired to mentor and encourage other Black students.

She cofounded the Association of Black Political Science Students, a Pitt student group that in part aims to increase the percentage of Black faculty in the department and to raise the visibility of political science students of color.

She also founded Crown Culture, a natural hair appreciation student group that worked together on community service projects and met regularly to uplift and educate one another about natural hair, including navigating professional workplaces.

And, amid the civil unrest of the summer of 2020, she wanted to ensure that the organizational culture within the student ambassadors program reflected inclusivity.

Inspired by the words of the late U.S. Representative and civil rights champion John Lewis, “Do not get lost in a sea of despair. Be hopeful, be optimistic. Our struggle is not the struggle of a day, a week, a month or a year, it is the struggle of a lifetime. Never, ever be afraid to make some noise and get in good trouble, necessary trouble,” she founded Good Trouble within the Dietrich School student ambassador group.

The ambassadors have developed student panels in the Pittsburgh Public Schools to strengthen a pipeline to Pitt for city students who might not have considered themselves in college. And among Good Trouble’s first projects was developing a partnership with the Greater Pittsburgh Community Food Bank to alleviate the disproportionate burden of food insecurity on Black and Brown communities during the pandemic. “I envisioned it as a subcommittee that could reflect this mission of diversity, equity and inclusion and enhance relations in the community,” she said.

Harrison-Griffin was a student member of the Dietrich School Diversity Task Force, where she served alongside her faculty advisor, political science professor Andrew Lotz.

“Destiny is a great student, but given the experiences of doing committee work with her, she’s more than just a student in my mind but a part of the fabric that molds and moves Pitt toward what it could be,” he said.

“Destiny was a continually powerful voice on the committee, fearless as an advocate for what students needed in not just that moment to be supported by the University but going forward with the larger ways in which the campus community could be thoughtful and generate real address to patterns of systemic racism,” said Lotz.

“What definitely stands out about Destiny is her ability to connect, to bridge and to motivate that diverse group of faculty, staff, graduate students and fellow undergraduates. … Destiny navigated it perfectly, and her input was some of the most powerful in those meetings because of that clear effort to understand the varied nature of the committee and present concerns in ways that could speak to everyone regardless of faculty/staff/student status.”

Harrison-Griffin hasn’t neglected her academics amid her advocacy but instead has entwined them with her interests.

As part of an Africana studies capstone research seminar, Harrison-Griffin pursued an independent research project focused on the famed Brown vs. Board of Education case and its importance to the Black community and to education in general. “Some revisionist sentiments have downplayed the importance of the case,” she said, observing at the same time the impact of the landmark civil rights decision on her own ability to study at the University.

She also dove into assisting political science professor Scott Morgenstern with research for a book on U.S.-Latin American relations across multiple decades.

“For the first few months that she worked with me, all I knew is that she was a dedicated and insightful student,” Morgenstern said. “This was a volunteer position, and yet she really dug into the work and impressed me with her diligence and high-quality work. When I later discovered a bit about her life story and how involved she was in so many high-level and socially impactful projects, I became even more impressed. … She is clearly one of the most dedicated students—both in terms of her academic pursuits and social concerns—with whom I have had the pleasure to work,” he said.

In letters of recommendation, Temple has highlighted Harrison-Griffin’s strength in observing and assessing before offering her thoughts in class as well as her ability to connect the practical applications of her studies to the current moment.

“She has not been the type of student who eagerly raises her hand first or who vies for the professor’s attention to share early and obvious observations about the texts we study,” Temple said. “Instead, Destiny shares her ideas last after patiently listening. … Without fail, every time she shared her insight into a text, it was more mature than her peers, more philosophical than her peers and more innovative and original than her peers.”

Harrison-Griffin plans to spend the next several months in Pittsburgh to explore the city in a more relaxed way as she prepares for her graduate studies. “This summer, I plan to take some time to myself before law school,” she said. “It will be a really difficult journey with a lot of work—this rest period will be nice.”

Harrison-Griffin’s support for fellow students and devotion to making good trouble isn’t ending when she receives her diploma. She’s among the 2021 Panthers Forward cohort, a group of 150 students who pledge to pay forward the federal student loan relief they receive by mentoring and providing financial support to future Pitt students.