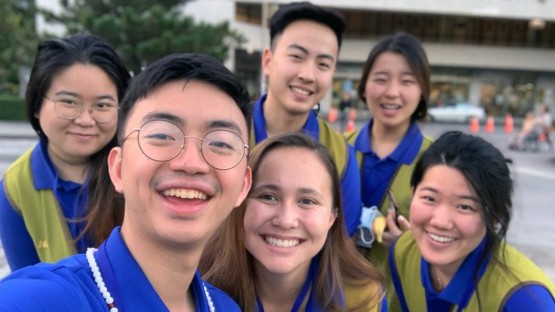 Throughout his Cornell career, Dustin Liu ’19 was deeply involved with the community-engaged learning initiative (CEL)—a university-wide effort to involve every Cornell student in learning with and from communities.

Dustin says that his engagement with the larger Ithaca community started from the moment he first set foot on the Cornell campus to take part in a pre-orientation service trip. His team worked together on service projects at Ithaca High School and Ithaca Children’s Garden.

He says his teammates “came in as strangers, but left as family who became connected through service,” adding, “It was because of these experiences that I began to call Cornell, and the greater Ithaca community, home.”

Dustin went on to volunteer as a math tutor at Ithaca High School. This was just the start of an engagement journey that included service as a student-elected trustee, an advisor for a peer-to-peer mentoring program targeting underserved high school students, an ILR Global Service Learning Program in India, a Fulbright fellowship in Malaysia, and his current role as a UNA-USA Youth Observer to the United Nations.

Six years ago, the Einhorn Collaborative made a $50M gift to Cornell to launch the CEL initiative and ensure that community-engaged learning is a hallmark of the Cornell undergraduate experience.

As part of the Cornell Alumni Leadership Conference (CALC), held online on Feb 24-27, David Einhorn ’91 shared his motivation for investing in community-engaged learning and his aspirations for the initiative. Hundreds of Cornellians tuned in to the livestream presentation on Feb 26, “Stories from the Inside: Cornell’s Commitment to Public Engagement.”

“We want every undergrad at Cornell to experience what it’s like to work with a community partner to solve problems and serve the greater good,” Katherine says.

Read the rest of this story from Alumni Affairs and Development.