Baseball great Hank Aaron, who died Friday, was connected to Duke in several ways, less because of his extraordinary performance on the baseball field, but more because of his contributions to the civil rights movement and to the education of young people.

In 2018 when the Samuel Dubois Cook Society named its Young Scholars Summer Research Institute after Aaron and his wife Billye to honor their support of the program and other similar programs across the country. The Aarons, along with Ambassador Andrew Young, visited the campus for a ceremony and talked about his friendship with Samuel Dubois Cook, the first African-American faculty member at Duke, and Aaron’s desire to follow Cook’s example in promoting the education of young people.

The three-week summer social science program for Durham Public School students is free, and helps train the students to develop an interest in researching issues of economic, social, and political inequality.

In a statement today, William “Sandy” Darity, professor and director of the Cook Center, paid tribute to Aaron for his courage and conviction.

“Hank Aaron is most famous for his remarkable career in baseball,” Darity said. “But we also value him, deeply, for his personal integrity and his willingness to take courageous stands on important social issues, particularly those that involved racial injustice.  He and his wife, Billye Suber Aaron, always have had a commitment to justice, regardless of the cost. We are honored to have been able to name our Young Scholars Summer Research Institute after both of them. Mr. Aaron’s death is both a deep loss for the Cook Center and for me, personally.”

Related:  Diversifying Computer Science, One Cohort at a Time

Aaron several several trips to campus. During one, men’s basketball coach Mike Krzyzewski invited Aaron to the practice. It was a meeting of two people who admired each other for their leadership as much as for the results of their athletic performances.  Later, Aaron said, “[Coach K] is quite a coach, not just of what he does on the court, but also how he carries himself and what he teaches his team. It was a great honor for me when he stopped practice and told the team he wanted them to meet me.”

Aaron’s legacy is also clear in Duke Professor Mark Anthony Neal’s 2014 essay in The Root on the occasion of the 40th anniversary of Aaron breaking Babe Ruth’s home run record.  In “Hank Aaron’s Home Run Record Meant Everything 40 Years Ago. It Still Does,” Neal recalls how for him and many others, Aaron’s historic moment ranked with Jesse Owens in the ’36 Olympics and Joe Louis winning the heavyweight title as the keystone moments connecting race, sports and America in the 20th century. Just 8 years old at the time, Neal said following Aaron’s on his way to passing Ruth “marked the beginnings of my consciousness as a race man.”

Aaron was part of Duke in another unusual way – the art collection of the Nasher Museum of Art. His stylized portrait by artist David Levinthal is part of the artist’s Baseball series that is in the Nasher Museum. The museum paid tribute to Aaron Friday, noting on Instagram that the portrait will be part of an upcoming installation of large-format Polaroid photographs by Levinthal that capture some of the most iconic moments in the history of baseball.

Related:  The Cancer Microbiome Reveals Which Bacteria Live in Tumors 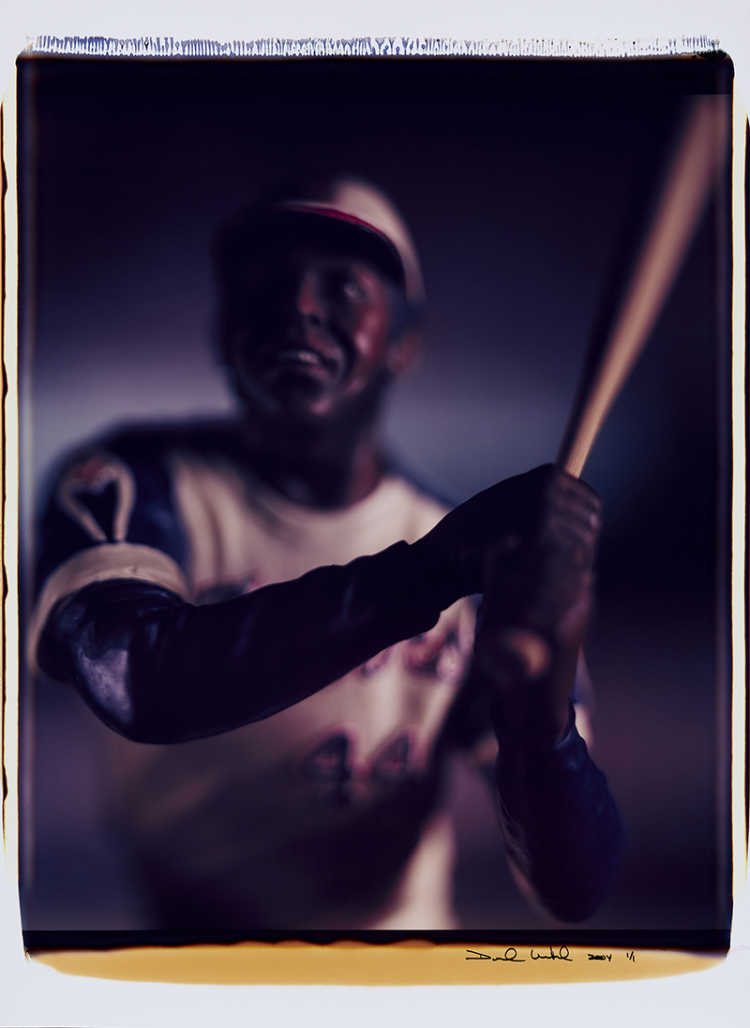