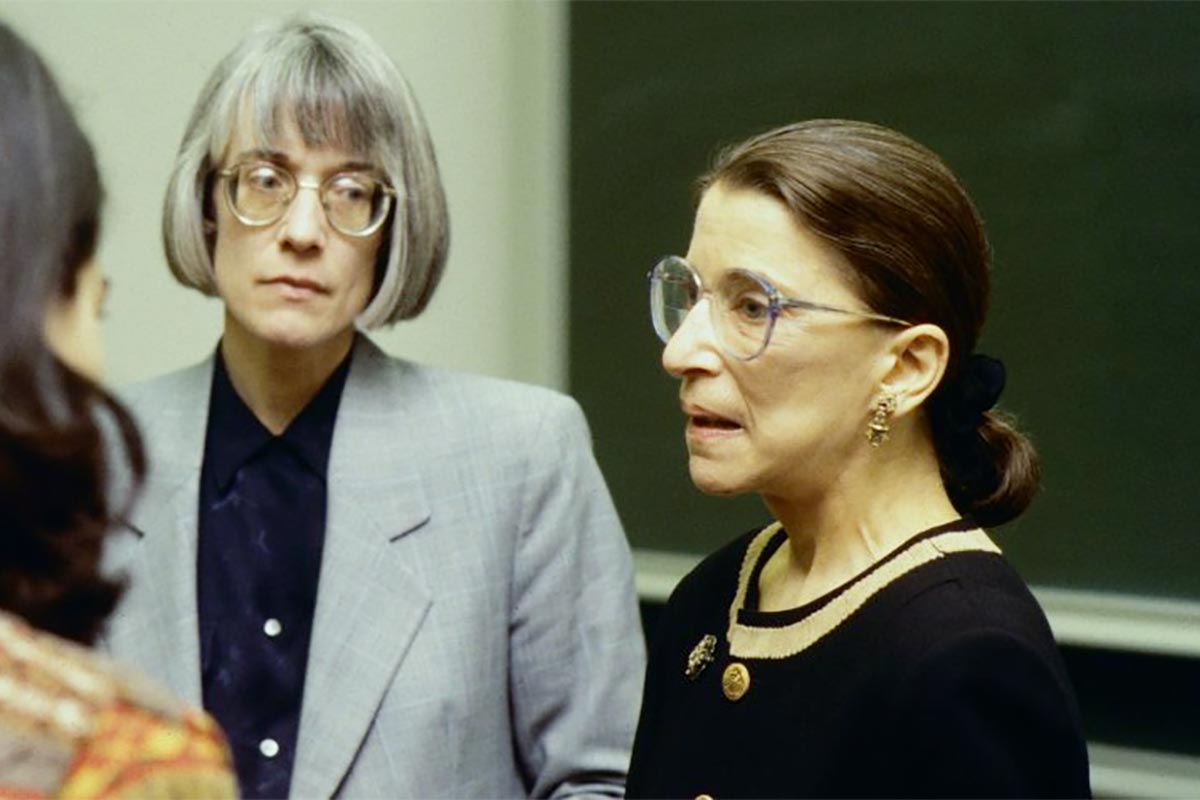 Faculty and alumni at the University of Virginia School of Law are sharing memories and honoring the impact of U.S. Supreme Court Justice Ruth Bader Ginsburg, who died Friday. She was 87.

Ginsburg was the second woman to serve on the Supreme Court, and was known as a feminist icon and pathbreaking lawyer and jurist even before President Bill Clinton nominated her to serve on the high court in 1993.

“She was the equivalent of Thurgood Marshall as an advocate of women’s rights, with a record of victories in the Supreme Court that rivaled his,” UVA law professor George Rutherglen said. “She was an ardent and effective justice in protecting women’s rights.”

He pointed to the 1996 case United States v. Virginia, in which the Supreme Court struck down a longstanding male-only admission policy at Virginia Military Institute in a 7-1 decision written by Ginsburg.

UVA Vice President and Provost M. Elizabeth Magill, a former UVA Law professor and vice dean who has also served as dean of Stanford Law School, said Ginsburg hired her as a clerk on St. Patrick’s Day in 1995, “and I felt very lucky.”

“The year I spent with her shaped me as a lawyer, a writer and also a professional,” said Magill, also a UVA Law alumna. “It was rewarding – but also grueling. She modeled something really unique: a work ethic like I’d never seen before; a meticulous commitment to the craft of writing an opinion; seriousness combined with dry humor; an extraordinary partnership with Marty Ginsburg; an inexhaustible love of everything about the law; and more idiosyncrasies than I can count. Suffice it to say, she was one of a kind.”

Magill said she had vivid memories of Ginsburg calling her from the car to discuss a case before oral argument.

“Usually her speech contained long pauses, but when she talked about the law, she was a motor mouth,” she said. “I would pick up the phone and she would start nearly mid-sentence, on a tear, ‘Your memo on page five was right, the government’s argument is off, but what you said on page seven is just wrong, that precedent has been undermined and it was one of the Supreme Court’s worst opinions in this area anyway …’ She would arrive at the court, minutes before the gavel was pounded for the start of argument at 10 a.m.”

Related:  U Got the Look: Meet the Alumna Behind the ‘Reimagining’ of Prince’s Paisley Park

Professor and UVA Law alumnus Toby Heytens, who clerked for Ginsburg during the 2002 term and is now serving as Virginia’s solicitor general, said he interviewed with the justice soon after the pivotal and contentious Bush v. Gore decision that essentially determined the result of the 2000 presidential election.

“I consulted with all of my recommenders, and they were unanimous about two things: RBG would not postpone the interview and there’s no way she would mention the decision,” Heytens recalled. “They were right about the first, but not the second: Practically the first words out of her mouth were whether I had ‘read our recent decision.’ That was my first lesson that it was hard to predict what she would do.”

Heytens said he marveled at how one of the physically smallest people he’d ever met “who was unfailingly kind to me was also one of the most terrifying.”

He added, “I think it was probably how much I admired her, how absurdly smart she was, and how committed to getting it right.”

Before his interview, Magill gave him a piece of advice he’s never forgotten: Resist the urge to “chatter nervously.”

“The justice, she explained, often spoke quite slowly and deliberately and had a tendency to pause mid-thought,” he said. “Another co-clerk of mine later told me that he had been advised to count to ‘three Mississippis’ before interrupting her.”

During Ginsburg’s visit to the University to accept the Thomas Jefferson Foundation Medal in Law in 1997, Professor Anne Coughlin hosted the justice in her Feminist Jurisprudence class, in which they had spent hours discussing the equal protection revolution Ginsburg launched as a young litigator for the American Civil Liberties Union.

“Ruth Bader Ginsburg was one of the most influential legal theorists and litigators, as well as jurists, of the century,” Coughlin said. “She launched a movement that changed everything,” so “we were beyond excited to meet her.”

Coughlin recalled that the Q&A session after an initial talk by Ginsburg was “electrifying.”

“It was then that Justice Ginsburg came alive, and we saw not only her brilliance, but felt her unfailing commitment to achieving social justice for women and men,” she said.

Coughlin added that the most powerful exchange took place when a student reminded Ginsburg that some feminists criticized her work because it did not help poor or minority women, “but only the privileged women who had the resources to develop resumes that, but for their sex, were identical to those of white men.”

What did Justice Ginsburg have to say to those critics, the student wondered.

“I will never forget the justice’s response, and I think of it often as I contemplate her legacy and the work that remains to be done,” Coughlin said. “In a quiet but penetrating voice, Justice Ginsburg reminded us to contemplate the clients whose cases and causes she had represented.”

Ginsburg recounted her client Sally Reed, a single mother whose teenaged son took his own life. The father had deserted the family when the boy was very young.

“When Ms. Reed filed a petition to administer her son’s estate, her application was denied,” Coughlin said, describing Ginsburg’s account. “The probate law at that time required that male applicants be given preference over female ones; the boy’s father had filed a competing petition and the probate court appointed him to be the administrator. When Ms. Reed tried to appeal, lawyer after lawyer refused to represent her. Why bother with the case, they wondered? The boy’s estate consisted of about $500 and a used car.

“There was nothing there worth litigating, and, besides, Ms. Reed was going to lose. Ms. Reed saw the stakes differently. The case might not be worth much financially, but it was worth everything to her to establish that her sex did not automatically disqualify her from representing her son. Ms. Reed finally found a lawyer who agreed to take the case, and, just as the other lawyers had predicted, she lost in the lower courts. Then, Ruth Bader Ginsburg and her ACLU team joined the case, RBG argued and briefed the case before SCOTUS and, for the first time ever, SCOTUS struck down a legislative classification that favored males over females [in Reed v. Reed].

“It was for Sally Reed and others just like her that Justice Ginsburg launched her revolution and for whom she fought brilliantly, passionately, tirelessly,” Coughlin said.

For more memories of Ginsburg, visit the School of Law’s original story.