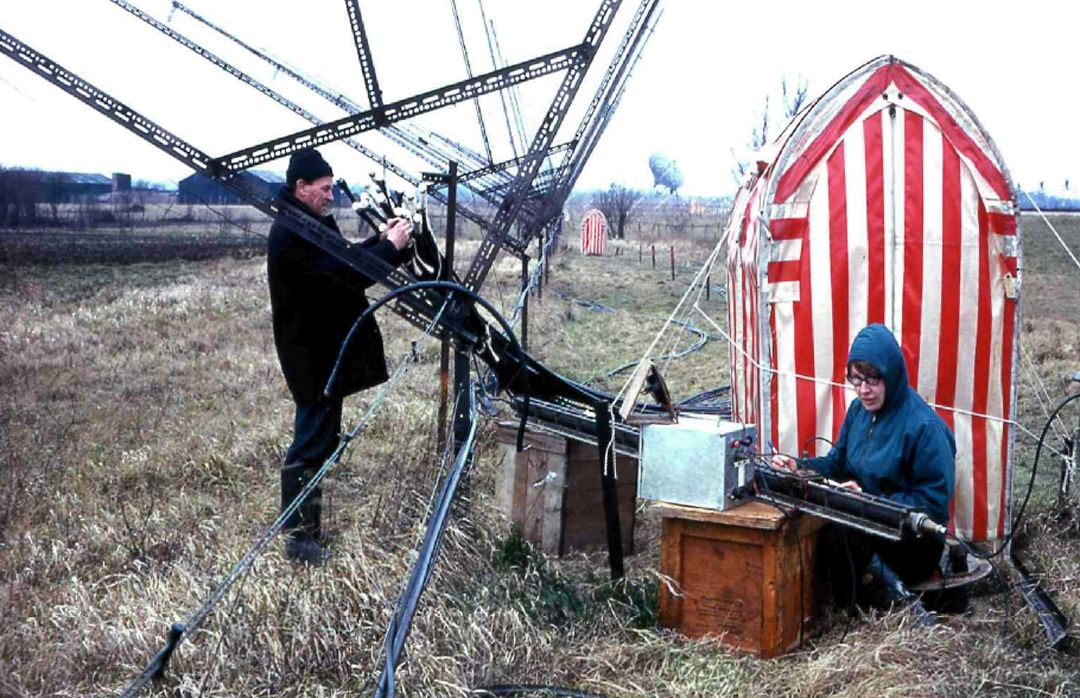 Sections of the telescope still exist at the Mullard Radio Astronomy Observatory outside Cambridge. What was it like to build?

JBB: It looked like an agricultural frame, something you might grow peas up – a lot of wires and cables strung from posts over a space the size of 57 tennis courts. It was actually built to study radio emission from quasars. I built the prototype and then six of us took two years to build the real thing. It was unglamorous but it functioned very nicely and switched on the first time I used it.

In the space of two months, you discovered the first four pulsars; 3,000 are known today. Why are pulsars interesting?

JBB: They’re extremely small, about ten miles across, and very dense because they’re formed when stars of a certain size catastrophically explode. If you jammed the population of the globe into a sewing thimble, it would weigh the same as if it was full of pulsar material.

Pulsars are visible because they swing a beam of radiowaves around the sky, a bit like a lighthouse, and when that beam shines at a radio telescope, you pick up a very accurate pulse, pulse, pulse, pulse ­– like ‘clocks’ dotted throughout the galaxy.

They have a lot of extreme physics going on inside them and scientists use them to test theories of relativity on a cosmic scale. Einstein’s theories are checking out pretty well so far.

How would you describe yourself as a 24-year-old PhD student?

JBB: I was very, very thorough, making sure I really understood how that telescope worked, and that it was working properly. I was quite convinced that I wasn’t clever enough to be in Cambridge and would be thrown out at some stage. My policy was to work as hard as I could so that I’d know I’d done my best. We now label this as impostor syndrome, but we didn’t recognise, and certainly didn’t name it, back then.

You famously used the letters LGM to label your charts. Tell us about the Little Green Men.

JBB: Radio telescopes pick up human-generated interference: arc welders, sparking thermostats, badly suppressed cars. I had to identify this interference and got quite used to recognising features on the chart. Occasionally there would be something I didn’t recognise and I’d record it with a question mark or, as a joke, LGM for Little Green Men. It was easier than saying “you know that funny pulsing source at right ascension 1919, declination plus 20”. So, it became LGM.

How did this turn into discovering the first pulsar, which you later named CP1919 (Cambridge pulsar at 19 hours 19 minutes right ascension)?

I got out previous recordings from that bit of sky. It often wasn’t there, but when it was, it was keeping its place amongst the stars.

I talked to my supervisor, Professor Tony Hewish, and he pointed out that it was only occupying a quarter inch of space on the charts – about one part in 10 million of all the charts I had. He suggested I switch to a better, faster recorder. For a month it recorded nothing, and then one day, on 28 November 1967, it came again, a string of pulses one-and-a third seconds apart.

Tony was cautious. He suspected I’d wired the radio telescope up wrong. So we checked on another radio telescope on the site. The thing was pulsing nicely on mine but as we stood by the pen recorder of this other telescope, nothing happened. It was a horrible moment. And suddenly there it was, five minutes later because we had miscalculated when the telescope would see it. If we’d miscalculated by 25 minutes, we’d have all gone home and the story would be different.

Images: the first detection of radio signals from CP1919 was on 6 August 1967, although the pulsed nature was not suspected at this time. The first observation of pulses was on 28 November 1967. Images courtesy of Churchill Archives Centre, HWSH Acc 355.