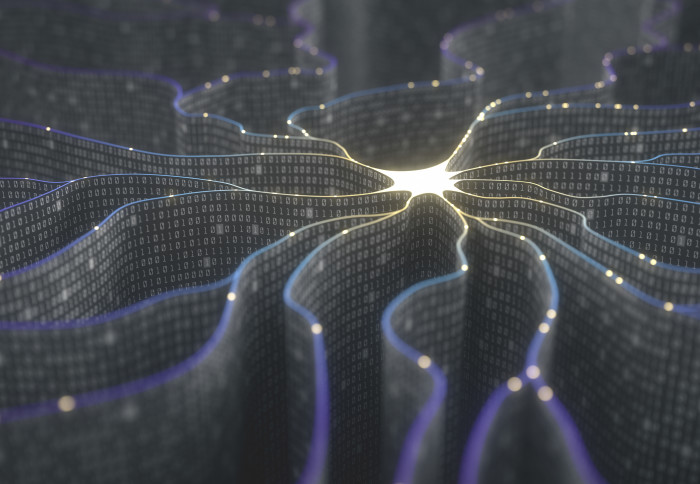 Imperial academics have plotted the roles that AI could play in our future society in a new map that connects reality to science fiction.

The Automated Futures Map is designed to show how different AI tools and techniques link together and how they could pave the way to future technologies that have yet to be realised.

Existing brain-computer interface technologies could one day prove to be a stepping-stone towards shared dreaming, the recording of our internal monologues, or cyborg rights, according to the map. Similarly, natural language processing technology could advance to allow us to develop earbuds that can translate speech from one language to another instantaneously, or even allow us to communicate with other species.

Far edges of our imagination

The map was designed by Imperial’s Tech Foresight team, who collaborate with Imperial academics to explore breakthrough technologies and assess their potential impact on humans, society and businesses in the future.

Rather than being a threat to humanity, AI systems are helping us protect it Dr Antoine Cully Department of Computing

While some of the technologies on the map might seem fantastical, it is designed to demonstrate the breadth of work taking place within AI and robotics, show the links between different technologies, and explore what the future of the field might look like.

Dr Antoine Cully from the Department of Computing was the lead academic involved in the map’s creation. He said: “AI is actually a vast field, and not everybody realises this. Even as an AI researcher, some areas are still alien to me. What we have tried to do with the map is create a visual representation of where we are now with AI technologies, how it all fits together, and were this might lead us both in the realistic medium-term and at the far edges of our imagination.”

“Some technologies we thought were impossible just a few decades ago are now commonplace. Image recognition used to be the stuff of science fiction but is now used by social media channels to identify who is in photos. It has seen huge leaps over the last few years.”

Many people get caught up in dystopian imaginings of the future when they think about the future of AI and robotics, Dr Cully says: “The idea of, for example, self-healing robots tends to scare people because they imagine cyborg uprisings the likes of which are seen in films. In reality if you locked the world’s most advanced autonomous robots in a room right now the most dangerous thing they would do is start hoovering the floor. Robots at the moment are very useful for defined tasks, but tend to struggle outside of, for example, a factory setting.”

“People are always asking what the next great leap in AI will be. It’s the million-dollar question. One exciting application is the use of AI in creative fields like videogames. Not only in terms of artificial players, but for content creation and vast world building. There are already AI systems that can play roleplaying games like Dungeons and Dragons and that will respond to players in what seems like a totally creative manner.

“At the same time, the use of AI in medical contexts is rapidly advancing, for example to help determine the best treatment strategies for patients with illnesses like sepsis. Rather than being a threat to humanity, AI systems are helping us protect it”

It is one of several ways Imperial helps businesses address their challenges by accessing the expertise of its academics and students. You can learn more on the Enterprise Division website and in the latest Review of Enterprising Activity.