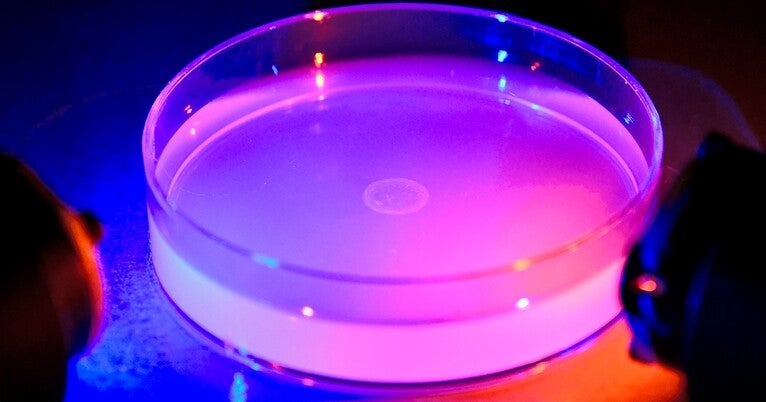 Worms don’t like the blues. At least not the blue-tinged toxic bacteria that are common in the environmental trash heaps they call home. So how does a bacteria-foraging worm — without eyes, photoreceptors, or the opsin genes that help animals perceive color — avoid the toxic, blue-reflecting bacterium Pseudomonas aeruginosa?

“I told him he was being ridiculous,” said Nitabach, professor of cellular and molecular physiology, of genetics and of neuroscience.

Turns out Ghosh was right. In the March 5 issue of the journal Science, Nitabach and Ghosh report how worms manage to detect color in complete absence of a basic visual system.

This discovery expands our current ideas about the possible range of sensitivities that cells and organisms — even those that lack the proteins required for vision — might have to light in their environment.

In a series of experiments, the research team exposed different strains of the worm Caenorhabditis elegans to either the colorful P. aeruginosa bacteria in white light or to colorless E. coli bacteria in light of varying color spectra. They found that while some family members require both a chemical signaling toxic bacteria and a specific color to decide to avoid the bactera, others avoid the bacteria based on color alone. In both cases, the worm’s decision on whether to avoid the bacteria was guided by the color of light in its environment.

The lab also identified two genes in worms that are associated with the ability to gauge color. In mammals, these same genes help regulate the response to stress and can be activated by exposure to ultraviolet light.

“What the worm is doing is something very smart,” Nitabach said. “They are trying to generate a more accurate picture of external reality by employing multiple senses at same time.”

The researchers speculate that this ability helps worm engage in healthy foraging. For example, for worms that have been exposed to toxic bacteria that secrete blue pigments, avoiding the blues might be a really good idea.