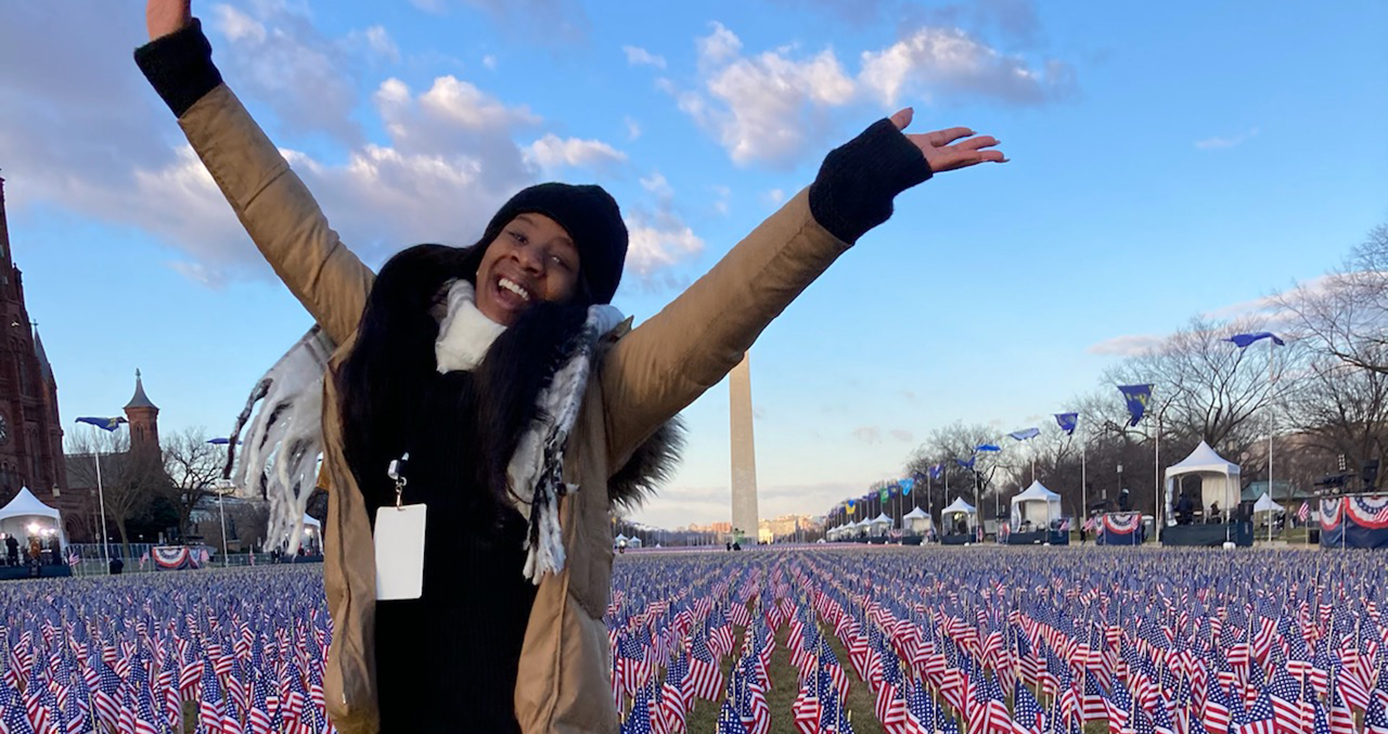 Pitt senior Gabriella Ogude was among a handful of people on the National Mall as Joe Biden and Kamala Harris were sworn in as president and vice president of the United States on Jan. 20.

On a pre-pandemic Inauguration Day, the Mall would be teeming with hundreds of thousands of people. Instead, amid tight security, she watched alongside media crews as part of the Presidential Inaugural Committee’s media and logistics team.

Her three days in Washington, D.C., were a whirlwind of 14-hour days, spent mostly outside in the cold. “We could not feel our feet,” she said. “But it was a great experience.”

Ogude was the youngest and the only college student on the team. “Most of them were mid-20s and had experience in political campaigns and on candidates’ advance teams,” she said.

“I made it a point to work hard to stand out. I decided I should be the first one there and the last to leave. Because of that I was there at 3 a.m. and left at 6 or 7 p.m. I’d have a double shot of espresso and go.”

While she was kept far from the president- and vice president-elect, Ogude met representatives from all the major networks and media outlets.

She admits being both star-struck and honored to meet Eboni K. Williams, the attorney, TV host and executive producer who inspired her to pursue a career in broadcasting.

“She represented a path I saw that was potentially attainable as a Black woman,” Ogude said. “She had a nontraditional path, and I respected her journey. I’ve watched her career rise in the last three years.”

Ogude was even more thrilled when Williams followed up with a message encouraging her to continue following her dreams.

“She reinforced that I was meant to be in this place at this time and that I cannot give up. I know that the road to success is long and challenging, but moments like this cement the importance of following your dreams,” Ogude wrote in the journal she kept of her Washington, D.C., experience.

Ogude counts the chance meeting as confirmation that she’s chosen the right path.

I know that the road to success is long and challenging, but moments like this cement the importance of following your dreams

Ogude initially came to Pitt to pursue a career in pharmacy, but following the death of her mother during her first year and a difficult return to Pitt as she worked through her grief, she recast her career plans just last fall.

Growing up in York County, Pennsylvania, just 90 minutes from Washington, D.C., where her father worked as a lawyer and her mother was an accountant for a federal agency, she was encouraged toward a career in medicine.

Her parents, of Nigerian heritage, impressed upon her from her childhood that being a doctor, lawyer or engineer was the path to success, she said.

“But our house was all political—the news was on all the time,” she said, recalling dinner table debates pitting her progressive views against her dad’s more moderate perspective.

While she was a strong student, she lacked confidence and couldn’t envision herself as a doctor or a lawyer. Growing up in a mostly white community, “In my town I could never see myself be prom queen or captain of my volleyball team,” she said.

The events of last summer in the wake of the killing of George Floyd and the subsequent rise in attention to diversity, equity and inclusion moved her. And, “during the election cycle this year, I was watching these amazing Black women do these amazing things,” she said.

Related:  What We’re Reading Over the Break: 2020 Edition

In November, she told her father her true aspiration: to become a broadcaster who covers politics, law and culture.

“I had an organic chemistry test I was supposed to be preparing for,” she said. “I thought I was not giving myself a shot at life—I was weeping,” she said. “He said, ‘Whatever you do, I know you’ll be successful.’

“It was like taking off a straightjacket—ever since then, things have skyrocketed,” she said.

She joined a network of women of color in communications, which is where she found the Presidential Inaugural Committee opportunity.

She is on track to graduate in December with a degree in psychology with concentrations in communication and Africana studies from the Kenneth P. Dietrich School of Arts and Sciences.

“My goal is to give a platform to people of color in the mainstream media. If you have the platform, you get to shape the narrative in a way that is accurate,” she said.

“I’ve ended up where I was meant to be,” Ogude said. “I’ve found so much encouragement at Pitt.”

With the help of her adviser, she created a new plan. She reached out to Pitt’s Career Center to update her resume and cover letter. Staff there connected her with faculty member Kevin Smith, director of undergraduate studies in broadcast in Film and Media Studies. He worked one on one with her and connected her with a mentor: a six-time Emmy Award winning producer, who specializes in developing talk shows. Ogude is enrolled in Smith’s Broadcast I class this semester.

She’s eyeing internships in the NBC page program or at the White House after graduation to continue gaining experience. “I just want to be excellent,” she said.

“Gabee’s drive, passion and intelligence is inspiring for me,” Smith said of seeing Ogude strategize and implement a plan to achieve her goals. “I have no doubt she will exceed her own expectations.”