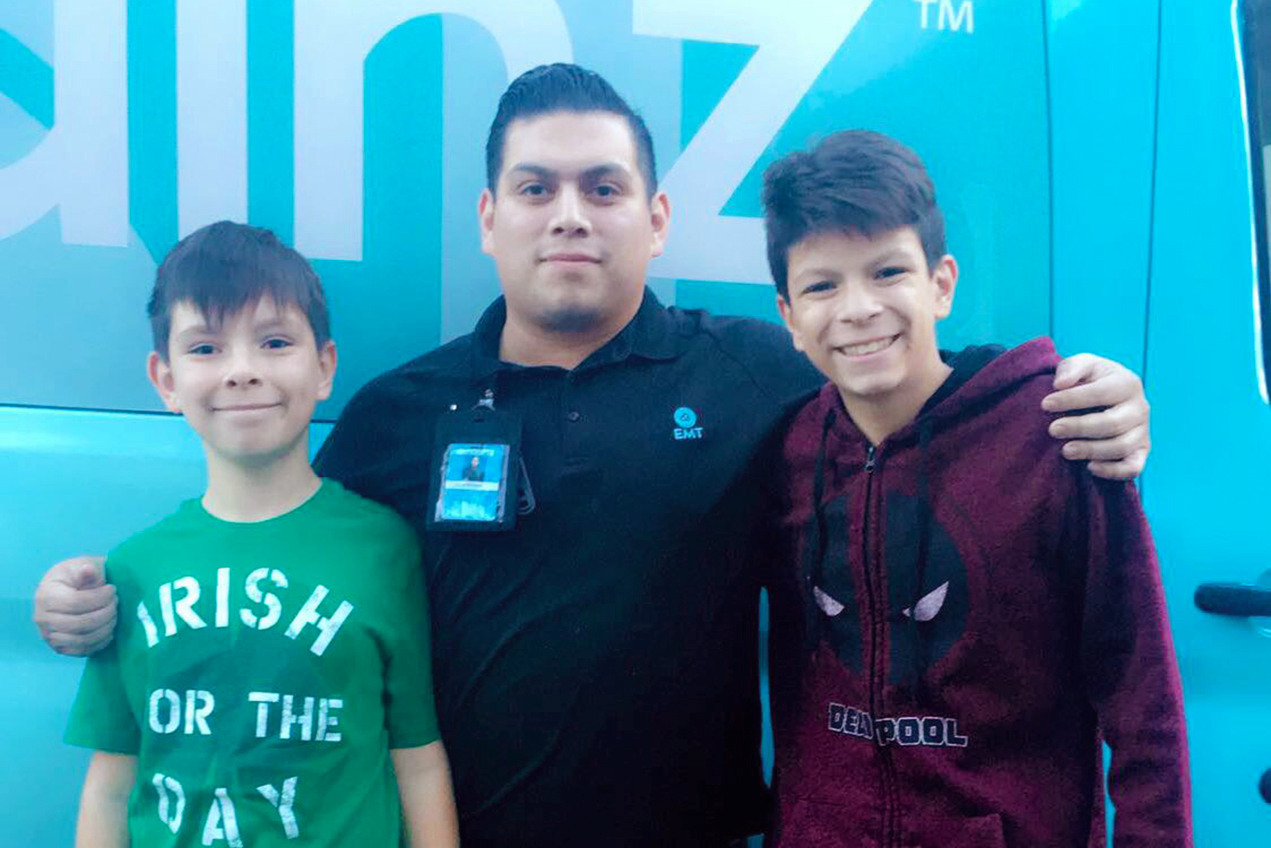 It started in 2019 as just a dime-sized lump on his wrist. Jose Contreras had no idea that it would eventually lead him to two world-class specialists at Keck Medicine of USC.

The lump wasn’t painful and didn’t bother him, so Contreras, a busy EMT and emergency services field training officer, ignored it for a while. But then in August, the lump rapidly grew to the size of a golf ball. Since Contreras sees a lot of physicians in a line of work, he asked a few about it and was told that it was probably a cyst.

“One suggested hitting it with a heavy book!” Contreras said.

But it kept growing. Eventually Contreras went to a hand and wrist specialist, then had to wait three months for an approval from his insurance company. By then it was clear that something was very wrong.

“The way it was growing, it looked like an alien with a tail wrapping around my arm,” Contreras said.

When the biopsy came back, Contreras was told he had a myxofibrosarcoma. Contreras’ hand and wrist specialist hadn’t even heard of that kind of cancer. That’s not unusual to William Tseng, MD, a surgical oncologist at Keck Medicine who specializes in sarcomas. Tseng, who is an associate professor of clinical surgery and part of the division of breast, endocrine and soft tissue surgery at the Keck School of Medicine of USC, is an expert in soft-tissue sarcoma, a rare cancer with more than 70 different subtypes.

“Sarcomas account for 1% of all cancer cases,” Tseng explained. “And with so many subtypes, someone who isn’t a specialist may only have seen them in a textbook, never in person.” That’s why Tseng emphasizes getting to a specialist as quickly as possible.

“You need someone who has an in-depth knowledge of how each subtype progresses and what the most effective treatments are for that subtype.”

Contreras was glad that he came to Keck Medicine. “I had a very positive experience from the start when I met Dr. Tseng. And then I looked him up online, and I knew I was working with the right person.”

“I loved the patients and the environment and helping people,” he said. “I felt like my world was ending and I would never be a paramedic. I just sat there wondering what I would do. I have kids. I have to take care of them. My boys look up to me. My daughter says, ‘Daddy’s a superhero.’ … And then on his first clinic visit, Dr. Tseng walked in and said ‘Yeah, we’re not doing that. I’m going to save as much of your hand as possible.’”

Tseng remembered that, “It was a big, nasty tumor at the wrist, but his hand was fully functional. The fact that he could move and use his hand made me want to try to save it.

“The textbook answer would have been amputation,” Tseng continued. “That would have been the easier thing to do. But we were willing to take some risks. This is a young guy, it’s his dominant hand, and he’s a first responder who has done so much for people. Following the modern approach of limb salvage, we did radiation, we did chemotherapy, and of course I got a plastic and reconstructive surgeon involved. We did everything possible to give him the best quality of life without an amputation.”

The procedure was a complex one, as the upper part of the wrist is filled with an intricate network of tendons, nerves, and blood vessels. Tseng had to remove the tumor while preserving that network as much as possible. He then called on plastic and reconstructive surgeon Ketan Patel, MD, associate professor of clinical surgery at the Keck School.

“I wouldn’t have been able to save his hand and wrist without Dr. Patel,” Tseng said. “I work with him and all the plastic and reconstructive surgeons here at Keck Medicine quite a bit. Once I removed the tumor, all the nerves and tendons were exposed. He was the one who did the fine work of reconstruction.”

“The first challenge was just one of size,” Patel explained. “The tumor had been about as big a softball.” Patel spent eight hours reconstructing Contreras’s wrist, and then he too went beyond the textbook.

Some reconstructive methods use tissue from a part of the body where the skin is thicker than the delicate skin of the wrist. “That can look bulky,” Patel said. Instead, he used an innovative procedure that only a few surgeons in the world perform, taking a thin flap of tissue from Contreras’ groin to better match the skin at the wrist. Without the flap technique, Contreras would have needed further surgeries and his wrist would have looked unwieldy. Patel’s choice to go a little beyond the usual gave him a better look at both the wrist and the donation site.

Both Tseng and Patel went beyond standard treatments to offer Contreras the best possible result and save the use of his hand and wrist.

“I woke up, and I had all five fingers on my right hand,” Contreras said. “I was so happy!”

After his surgeries, Contreras underwent chemo and radiation therapy for all of 2020. In January of this year, he started talking to HR at his company about coming back to work.

“I still had some swelling and pain, but I was a field training officer before, and I knew I could still move patients and train the next generation of EMTs.”

“For me, it hit me when they were taking me into surgery and was the one who had to be on the bed. The last five years of my life, I had been doing that for patients. Now I know how it feels to have a stranger make you feel happy and comfortable. It really brought it home how important that is.”

This March, Contreras started training to get his licensing back and go back to work, with an eye on becoming a paramedic. He says that his experience at Keck Medicine has reinforced his belief in kindness and connection.

“I always tell my trainees, ‘Your job is to make the next person’s job easier. Talk to the patient, get their history, treat them like a human being.’ I have been to other places where I felt like a patient. USC made me feel like a person. They made me feel like a family, a friend.”