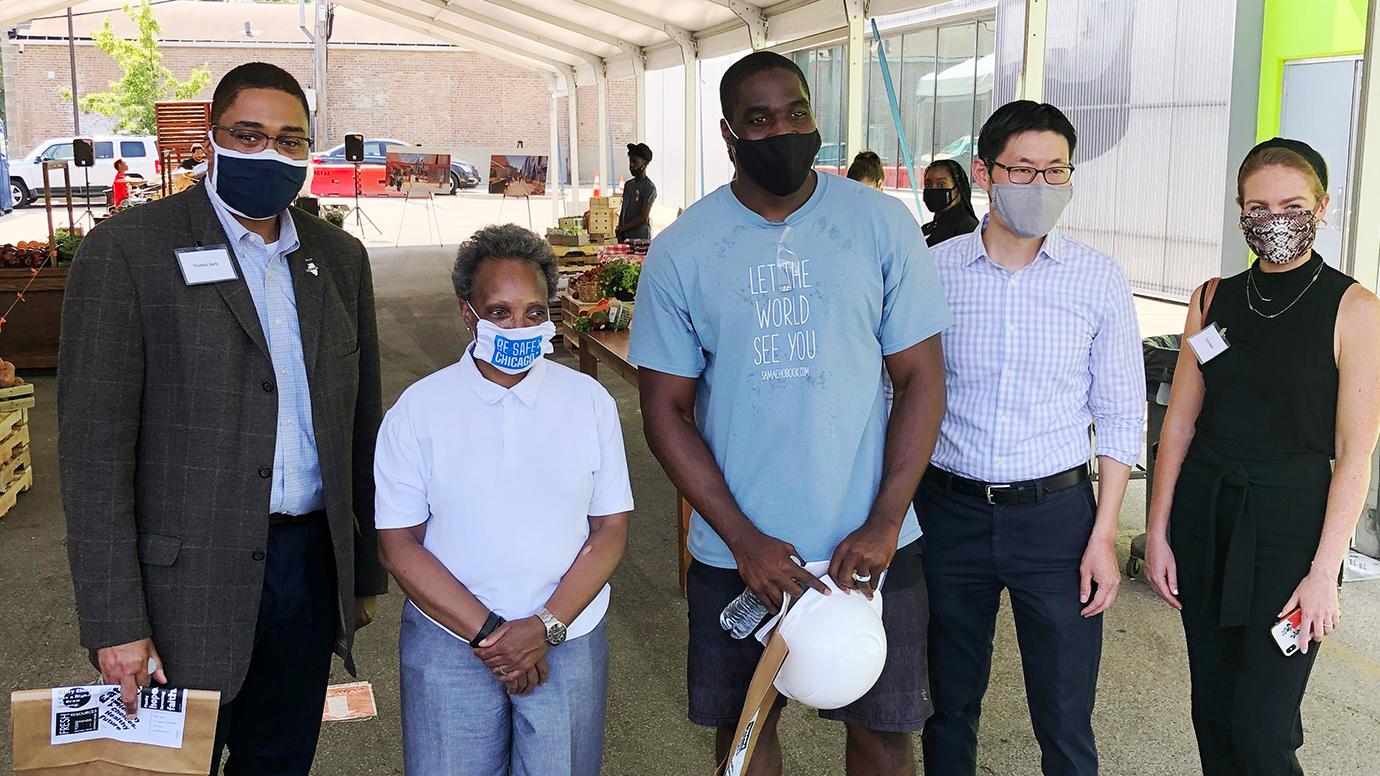 For many University of Chicago students, George Floyd’s death at the hands of police—and the racial reckoning it ignited—became a renewed call to action in the battle against inequality.

Urged by classmate Richard Kohng, AM’20, a group from the Harris School of Public Policy’s Evening Master’s Program volunteered to help Athletes for Justice (A4J), a nonprofit committed to fighting structural inequalities in Chicago and beyond.

Kohng already had a relationship with former Chicago Bears linebacker Sam Acho, who started A4J in 2017 in the wake of Colin Kaepernick’s protests for racial justice. But even working with then-teammates Trey Burton, Chase Daniel, Akiem Hicks and Mitch Trubisky, Acho had found it hard to get the organization off the ground. Professional athletes, after all, don’t often stay in one city for their entire career; Burton most recently played in Indianapolis, and Daniel is now in Detroit.

For help, Acho turned to Kohng, the director of civic engagement at North Park University.

“Sam and I exchanged texts, grieving after the murder of George Floyd, and Sam decided it was time to get the organization up and running,” said Kohng, who now describes himself as the volunteer executive director.

At that point, the Harris cohort had just finished the quarter and was headed to its summer 2020 break. “I reached out to our cohort hoping four to five people would come forward,” Kohng said.

More than than two dozen volunteered—about half of the cohort.

To help build infrastructure for A4J, the students split into project teams to use their range of professional expertise. They drafted marketing and strategic plans, worked on community partnerships and social media, set up legal protocols, and wrote mission and vision statements.

“Sam Acho had the vision, and we could help him get it to where he wanted to go,” said Kevin O’Shaughnessy, AM’20, a member of Kohng’s Harris cohort and a senior manager at the global investment bank Stout.

Related:  How will Europe grapple with economic downturn?

One of the first A4J initiatives was a fundraising campaign to convert a liquor store into a food mart. This was, Kohng said, “an idea conceptualized by local teens” in the By The Hands Kids Club, who had seen the shortage of grocery stores in the Austin neighborhood on Chicago’s West Side. Other athletes, including Blackhawks captain Jonathan Toews, had also taken bus tours with teens to the area.

“Even though A4J was started by Chicago Bears athletes,” Kohng said, “with Sam’s leadership, you had players from the Blackhawks, Bulls, Sky, Cubs and White Sox represented, who all came together for this project.”

The athletes contributed $500,000 for the food mart, which soft-opened as a pop-up tent last August and is scheduled to be completed as a permanent building later this year.

The July groundbreaking event included appeareances from Mayor Lori Lightfoot and NFL Commissioner Roger Goodell. “It was a powerful moment for both the young people who saw a dream for their community come to life and for the athletes who saw the power of collective action,” Kohng said.

COVID-19 safety measures limited attendance, but members of the cohort were there, including Kohng and Casey Buck, AM’20, a consultant for ConAgra.

“I think a lot of us were looking for a way to stay connected over the summer,” said Buck. “It seemed like a great opportunity to get first-hand experience building something together.

“The fact that we were going to have the opportunity to work with high-profile individuals who could tap into the collective energy of the social justice movement and leverage their social capital made it even more special.”

As work continues on A4J, Kohng said the organization’s emphasis will be on amplifying local organizations and their impact: “We know that professional athletes have platforms and influence that can steer the public’s attention to these dynamic organizations who drive so much local change.”

The athletes are in the spotlight, he added, “but we are using our [Harris] quantitative skills to tell those stories of local impact in numbers as well.”

Related:  COVID 2025: How the pandemic is changing our world

Cohort members involved in the project, including Dominique McKoy, associate director of the To&Through Project at the University of Chicago’s Urban Education Institute, credited Kohng for the project’s success. But Kohng said these results wouldn’t have been possible without Harris instructors like Sr. Lect. John Burrows; Krisinda Doherty, director of the Evening Master’s Program; and Tempris Daniels, program assistant director. It was their work on the cohort model that built such strong bonds.

Connections extend beyond the cohort. Buck, for example, connected A4J with her brother Jake Toohey, who works at the web design and development firm Adage Technologies. Toohey pitched the idea for Adage to build the branding and website for A4J pro bono, and Adage’s CEO agreed.

“It’s relationships,” McKoy said, “that are going to be equally as important as anything we learned in class.” Kohng echoed those sentiments, calling those relationships a great “on-ramp” for people to get involved in something that can bring value.

“With everything that happened around the murder of George Floyd,” McKoy added, “there were a lot of folks in the cohort who wanted to figure out a way to be more active and to really try to figure out a way that we could focus some of the energy and emotion that was happening around this really pivotal moment in our country.”

And through the A4J project, to be able to do “good in the city from a little bit of a different perspective was,” he said, “really exciting.”

—Adapted from a story first published by the Harris School of Public Policy. Learn more about the Evening Master’s Program by requesting information or referring a candidate.