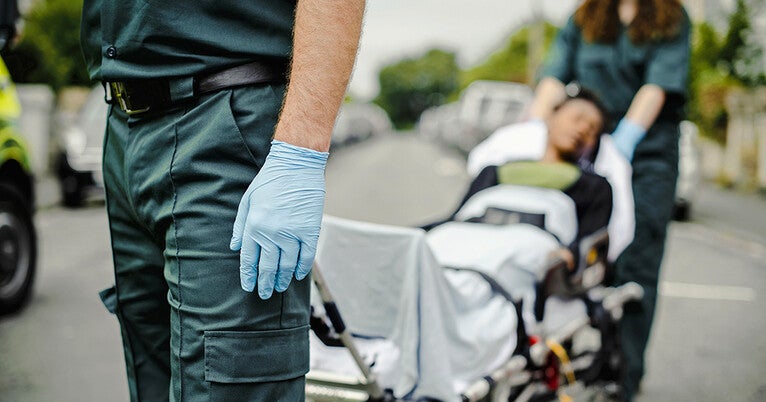 When third-year Yale emergency resident physician Dr. Isaac Agboola writes in the Annals of Emergency Medicine about the problem of bias in the emergency department, it’s a matter of personal as well as professional interest.

As one of the few Black male physicians in his class of more than 60 residents, and the first in his family to attend college and pursue medicine, Agboola says he feels a unique responsibility to represent Black patients who are brought in for treatment.

The article, “The Coats That We Can Take Off And the Ones We Can’t,” written by Agboola and co-authored by two assistant professors of emergency medicine, Dr. Ambrose H. Wong and Dr. Edouard Coupet, examines how bias influences emergency department treatment, particularly decisions over which patients must be restrained and/or sedated. Through his own experiences as a physician and stories from colleagues, Agboola says Black patients are often treated differently than others. A recent study by Wong reported that Black patients in the emergency department were much more likely to be physically restrained. Often the first step is deeming these patients as “agitated.”

The authors also explore how Trauma-Informed Care — a set of principles that guide the treatment of patients who have experienced trauma — can help to overcome such bias.

In a discussion with YaleNews, Agboola and Wong discussed the effect of bias in the emergency department and steps to improve the care for all patients. The conversation was condensed and edited.

What does it mean when a patient is “agitated”?

Isaac Agboola: It’s a broad term that we use in the emergency department, defined as a kind of excessive psychomotor activity, which could lead to aggressive or violent behavior. Sometimes it’s dependent on mood. Sometimes it’s due to someone’s underlying psychiatric disorder. It could be secondary to a substance use disorder or thyroid disorder or other medical condition. It’s a pretty ubiquitous term. You have to take specific care, especially when looking at vulnerable patients, with labeling them as agitated.

Ambrose Wong: With agitation, you are at risk for bias, because it’s all through the lens of the person observing that behavior.

In the new paper you describe a middle-aged Black man who was brought to the ER by police after being arrested in his home. Can you talk about that experience?

Agboola: This patient was brought in under suspicion that he had used drugs. Once that ball starts rolling, it continues to create agitation. You leave your home, you’re tied down, surrounded by medical professionals and cops. All of these things are adding to your agitation. The whole time you’re like, “Why am I even here? What led to this?”

Black individuals can disproportionately receive mistreatment and unfortunately even die at the hands of law enforcement. Which may be attributed in some part to bias, whether it be implicit or explicit. As medical professionals, we are not exempt from these biases and we need to take time to look for our own biases and see where we are falling short.

You refer to studies showing that Black people do not receive the same standard of care as white people in hospitals. What are some of those findings?

Wong: This goes back to those larger structural things that it’s harder to see in person-to-person interactions because you’re seeing 20, 30, 40 people in a shift. If someone’s coming in with police in handcuffs and they’re labeled as disturbed or aggressive, you can’t help but see that in a negative light.

We went back and looked at the medical records for patients who have been physically restrained. And we found that race did significantly predict use of restraints, even controlling for medical issues, sex, and other measures. I didn’t think about that as a problem at first because I myself don’t have that lens. It was just so eye opening.

Can you talk about witnessing bias as a Black physician? Is it difficult to speak up in those moments?

Agboola: On one hand, I am very privileged to be in this white coat. I am a Black male physician. I am a doctor at Yale. I’m first generation, the son of an immigrant. Many people I know have never been in the position that I’m in. But at the same time, I know that I am not far removed from being the person on the stretcher who has been labeled as agitated. Even if I am rightfully treating this patient, having to sedate them, having to restrain them, it still often feels wrong. Especially with these vulnerable populations, the system has failed them. And I hate to feel like I’m a part of this problem.

Whether it is racism, sexism, or xenophobia, it’s hard to call these things out. You have to find a way to be cordial and collegial about it, but at the same time put a spotlight on it and say, “Hey, I noticed. And I’m certain this is probably not your intention, but the treatment that we’re giving this patient has been different from the way we treated other patients with similar presentations.” But at the same time I’m a resident. I’m still in training myself. So, who am I now to challenge the system?

Agboola: The goal is to recognize the presence of these trauma symptoms, which we also see in agitated patients, and then provide a culture of safety, empowerment, and healing.

It comes down to understanding the trauma that’s in the patient, but also understanding the trauma that you as a provider have as well. As an emergency physician, there’s some internal burnout and moral injury that occurs by the nature of this career. And we want to make sure that we’re not taking that out on patients, because in my job, I have to make quick decisions.

It’s also very important that we as providers don’t let whatever context brought the patient in affect the way in which we treat them. There are a series of simple interventions that I recommend when treating agitated patients. First, remove any redundant staff to bring more calm to the room. I turn down the lights, decreasing stimuli. I talk to the patient. And then I work stepwise. If this person is able to be verbally redirected, great. If they’re not, we try medication. Safety is important for both the patient and the medical staff, but we don’t need to use a firehose to put out a candle.