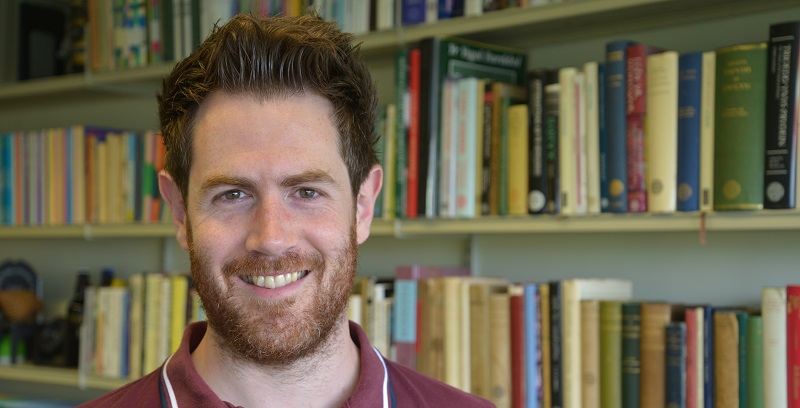 As Wales prepares to face England in the Nations Cup on Saturday 28 November 2020, a poet from Aberystwyth University hopes that two special poems composed for the autumn games will help raise the spirits of rugby fans during the Covid-19 pandemic.

Eurig Salisbury, a lecturer in the Department of Welsh and Celtic Studies and a former Bardd Plant Cymru (Welsh Children’s Poet Laureate) was commissioned to write the poems ‘Ni ‘da chi, bois’ (‘We’re with you, boys’) and ‘Outside, Inside, Centre’ by the Principality Building Society, who are the main sponsors of the Principality Stadium in Cardiff.

The aim was to show that the patriotic passion and spirit have not disappeared even though fans are not allowed to attend the games because of the coronavirus restrictions.

Messages of support were collected from grassroots supporters and rugby clubs across Wales and used as the basis for the Welsh and English poems.

Eurig Salisbury, who lectures in Creative Writing at Aberystwyth, said: “The word ‘home’, or ‘cartref’, appeared repeatedly in entries from rugby clubs and became integral to the poem. That fire within us, that passion and feeling of unification, still exists in our homes, our living rooms and from our armchairs.

“It became clear to me quite early on that there are many suitable images from rugby that can be used in new ways and in both languages in the context of the pandemic – the word ‘blindsided’, for example, to describe the unexpected shock, and the subsequent idea of the scrum as a great image for people coming together to work together, with their arms pleated like love spoons. And most striking, the fact that rugby is a completely physical game where touch is essential, when that’s something we all have to avoid so often these days. In that respect, I felt that watching rugby, and experiencing the tackles and physical play by proxy from our homes, could alleviate some of the frustration.”

The poems have been published in the form of two short films on social media, with the lyrics spoken by singer and broadcaster Cerys Matthews.

Wales have been playing their home games in the Nations Cup at Parc y Scarlets in Llanelli after the Principality Stadium was transformed into an emergency hospital at the height of the Covid-19 crisis.

Julie-Ann Haines, CEO of the Principality Building Society, said: “Even though we’ll be enjoying the Autumn Nations Cup from home this year, rather than the home of Welsh rugby, we hope our poem will unite rugby fans and show Wales’ national side that the whole country is behind them. It’s been a tough year for rugby clubs across Wales, but the internationals are an occasion rugby fans always look forward to and we know this year will be no different.”

We were all blindsided by this.
Hands on head and stilled, mid-stride,
we all stared at the screen.

Back then, before a shrill whistle
put a sudden stop to our ritual gathering
in tiers, where we’d throng in unified purpose
and warm our hands on pure spectacle.

Where a single match of red flame
could ignite an entire nation,
our stadium stands empty,
fire quenched.

Where we would stir the passions
of hymns over a blazing heat,
there sits a heavy lid
on our cauldron of rebirth.

So is it possible, a reimagining now,
after a static summer spent rooted
between halfback and fullback?

To those who’d say
we’re nothing but armchair fans after all,
think again:
we’ve skin in this game.

So let’s raise our roofs,
fill our hearts again with hope,
lift our hands and sing.

No, it’s not ours the split lip,
strapped knee and bruised rib,
but at home, all the same,
our sinews strain,
tight as bowstrings, harp strings,
bracing as in a fever dream
against an impact long desired.

The rules say: avoid touch.
But we yearn for the scrum’s
love-spoon knotwork cwtsh.
As we say in our language,
hawdd cynnau tân ar hen aelwyd –
new fires burn best in old grates,
and ours was always fuelled
by the ancient belief
that no opposition’s insurmountable.

Believe, then,
and let’s warm our hands on a passion
hot as a thousand hearths,
because in every home
there’s room for us all in this line-up,
outside, inside, centre.

We’re with you, bois.